We, the members of the IDAS (Retd) Officers’ Family Club, deeply mourn the passing away of our respected Family elder, the venerable Shri P. K. Sabhlok, on December 19, 2021.

We convey our heart-felt condolences to Madam Adarsh Sabhlok and others in the bereaved family, who all are so dear to us.

Sri Sabhlok was a universally loved and admired person who, with his ever-smiling visage, his personal warmth, and his helpful nature, left an impression of deep respect and regard in all who came in touch with him. A Vedic scholar of erudition and a gentleman to the core, association with Sri Sabhlok was always an enriching and soothing experience for all of us.

He was well known for his in-depth scholarship in, and abiding adherence to, the Vedic philosophy and teachings as the lodestar of his life. A prolific writer and inspiring speaker on myriad topics relating to the Vedas and the principles of Sanatan Dharma, he was a living example of both a jnani and a pious devotee.

In his other spheres of activity, such as in local civic affairs, Sri Sabhlok displayed exemplary qualities of leadership. With his innate goodness and empathy, he worked incessantly and effectively to bring together people in pursuit of common welfare as well as in pursuit of knowledge.

We, his associates, learnt a lot else from him, especially his positivity and zest for life. It was inspiring to see him withstand his bodily ailment with unfailing joie de vivre till the last breath. That bliss no doubt was the fruit of his own spiritual attainment, which he derived from his profound knowledge and adherence to the path of Dharma.

We pray that his noble and pious soul may proceed onward towards its deserving goal of Liberation.

All Members of the IDAS (Retired) Family Fraternity. 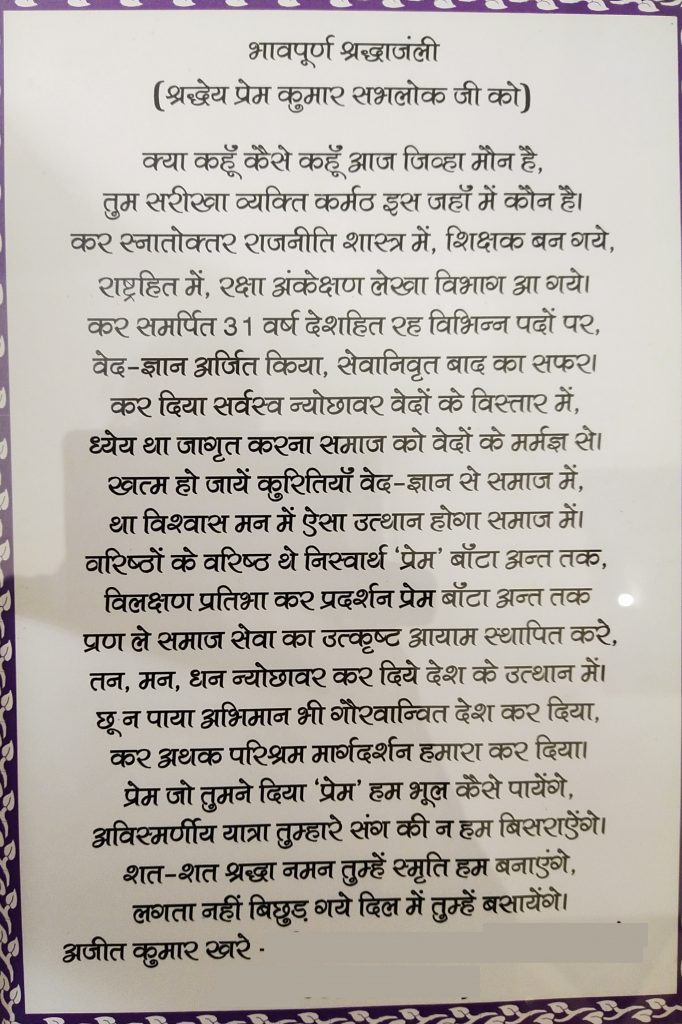 I am Sanjeev Sabhlok, his eldest son. On behalf of my mother, brother and sister, who will not speak today because they would prefer to allow others time to speak, and on my own behalf, I would like to thank all of you for having come to this prayer meeting and for the enormous outpouring of support and words of sympathy we have received from you and many others who could not make it today.

My father was man of integrity and spirituality. He was a role model for the family and for many others who came across him. He claims that he got his qualities from his parents. I agree: my grandfather and grandmother were also role models in simple living and high thinking.

In June 2021, he started suffering from various problems which led to the diagnosis of advanced cancer. I came to India from Australia in mid-August 2021 to assist in his care. Despite our best efforts and the efforts of tens of highly competent doctors, we could not stop the inevitable. He passed away in Metro Hospital on 19 December 2021. The one major consolation we have in the family is that he did not have to take a single pain killer during this entire period. He passed away peacefully while he was sedated on a ventilator.

By 11 October 2021 it was clear that his future was increasingly uncertain. I asked him to record his final message to the family and to the world. He wrote his message, then dictated it into the phone. I have compiled it into a YouTube video that is available at the website http://prem.sabhlokcity.com/.

Since he talks about the key milestones of his life in that video, I will only summarise his life and career here.

My father migrated at age 15 with his family, on 12 August 1947 from Rawalpindi to India at initially to Ferozepur, then moved with his father to Ambala in 1948 where he completed his graduation. He then went to Jullundur for his MA and got a job as a lecturer in Political Science in S.A. Jain College in 1957. He got married in the same year.

Two years later he was selected to the Indian Defence Accounts Service. During his service he was transferred 22 times. The family was always on the move, always prepared to pack up and leave.

While he served as Financial Adviser in the Defence Ministry, he saved India thousands of crores of rupees during negotiations for arms purchases from foreign countries. Not one paisa of corrupt money has ever entered this house.

His last position in his career was as the acting Controller-General of Defence Accounts in the rank of Additional Secretary to the Government of India.

My father enjoyed Urdu literature, which was the language he was first taught in school in West Panjab. He later became a keen student of philosophy and of the Vedas and wrote a book, Vedic Metaphysics. An online version is freely available.

He was a very social person and actively involved in the society, particularly in Palam Vihar. He was also the founder Vice President of Swarna Bharat Party that I helped created in 2013, to bring polices of liberty and good governance to India. Politically he opposed socialism which he had seen at close quarters during his tens of trips to the USSR.

I’ll end with two examples from his life:

First, when I was having jitters for my written IAS exam in 1981 in Bombay, he calmed me by reminding me of the story of Arjuna and Krishna. His view of life is summarised in two words: Nishkam Karma. Just do the right thing and forget about the consequences. I think this principle makes a lot of sense.

Second, he had the memory of an elephant. He almost never forgot any name or face and could resume a conversation from where he had left off years ago. When I was studying in D.A.V College Jullundur in 1978, he took me to visit Doaba College, where he had studied for his M.A. in 1955-1956 and was President of the Students Union. He took me to the hostel where he had stayed, and to the hostel’s kitchen. Amazingly, the cook from his days was still there and both recognised each other by name and shared a long conversation, discussing this and that person.

I ask that we celebrate his life, a life well lived. And to the extent possible, let’s all learn from him.

My father leaves behind a legacy that will live long after him.

I have tried to compile a few of his writings at prem.sabhlokcity.com. I invite you to watch the video in which he provides his message to the world in his own words, and I invite you to write about your memories of him in a post created on the website specifically for this purpose.