A beacon of integrity and spirituality: a role model for many 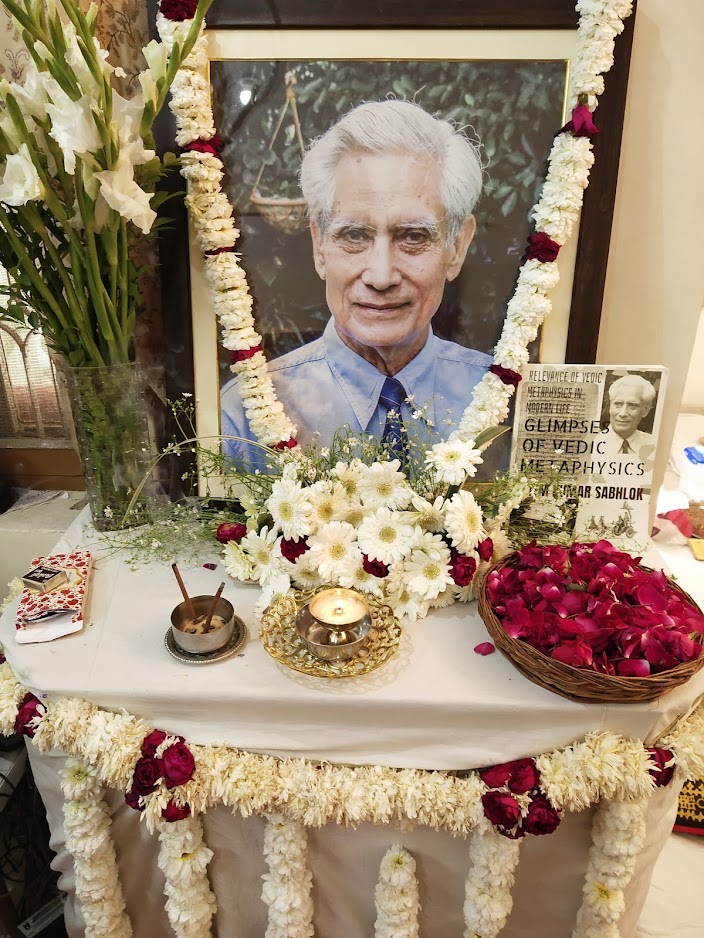 Euologies (The family invites you to write about him, if you knew him, in the comments section of this post) | His message in his own words | A talk on the Vedas | Vedic Metaphysics, an ebook freely available online |  His opposition to socialism

BRIEF SUMMARY OF HIS LIFE

1. Birth and prior family history

The clan was known as “Sethis” until the 1820s. In the 1820s, his ancestor Lala Sultan Chand was a Jamadar in the Sikh Khalsa Army of Maharaja Ranjit Singh. A Jamadar is an officer in charge of 25 soldiers, something like a Lieutenant. General Hari Singh Nalwa was impressed with him and called him “Sabhya lok” (a civilised person) and give him 25 acres of land outside Pindigheb. In due course the family split into two groups, one group writes Sabhlok, the other writes Sablok.

Prem Kumar Sabhlok was the seventh of 9 children. On 12th August 1947, three days before the partition, his parents along with their three younger children left Rawalpindi for Ferozepur where his father had received a transfer as Head Assistant in the Panjab Agriculture University. He was 15 years old then.

In 1948 his father was posted to Ambala and so Prem Kumar Sabhlok did his higher secondary and tertiary studies mostly in Ambala, including for his graduation from S.A. Jain College. He received his Masters degree in Political Science and Philosophy from Punjab University in 1956 from Doaba College, Jullundur where he was active in student politics (President of the Students Union) and one of the fastest long distance runners in Panjab (he used to run 20 km each day).

His first job was as a lecturer in S.A. Jain College in Ambala City in 1957. He served for two years as Professor of Political Science.

Two years later, in 1959, he was selected to the Indian Defence Accounts Service. During this period he had over 20 transfers across the country. He retired in 1990 as the Acting Controller General of Defence Accounts of India in the rank of Additional Secretary to the Government of India. He was known for his impeccable integrity throughout his life. He was involved in tens of negotiations with foreign governments on behalf of India’s Ministry of Defence, for purchase of defence equipment worth billions of dollars. He saved India potentially hundreds of millions of dollars in the process and he would not even take the slightest hospitality from the companies or governments involved in the sale. Not one paisa of corrupt money ever entered his house. Total integrity remains a strong family tradition.

He married Adarsh Chawla in 1957 and had two sons and a daughter (Sanjeev, Rajeev and Rashmi). At the time of his passing away he had four grandchildren through his son Sanjeev (married to Smita) and daughter Rashmi (married to Sanjive).

Upon retirement he purchased a small plot of land in Palam Vihar, Gurgaon and built a tiny, one storey house on loan. He took active part in the welfare of the local community in the  Joint Action Forum of Residents’ Associations (JAFRA), Gurgaon.

One of his main interests upon retirement was to review the political philosophy of Plato and Socrates. He found that their metaphysics had much in common with Vedic metaphysics. His 3-hour talk on the Vedas in Los Angeles at the California State University Fullerton on 28 April 1997 made him realise that people from different countries want to know more about the Vedas. So he wrote a book, Glimpses of Vedic Metaphysics that is available freely online and also in a printed version. He gave talks on Vedic metaphysics at many places including Hong Kong, Chennai, Pune and Delhi. He also travelled to Australia a number of times to meet his son and grandchildren.

He also supported his son’s formation of Swarna Bharat Party and agreed to be the founder Vice President of the party. He took that role seriously (as seen from his video below, opposing criminality and socialism).

Message to his children and to the world

Before he passed away on 19 December 2021 he was requested by his family to provide his message to the world. The following video is his brief message:

Speech against socialism and criminality

Some of eulogies on his passing away. The family will also deeply appreciate if you can spare some time to write about him, if you knew him, in the comments section of this post.